Haifa is Israel’s largest mixed city with a Jewish and Arab population, and has the third largest population of any city in Israel with 267,300 residents. Its city administration has around 5,000 employees, making it the largest and most complex City for All process held so far.

The City for All Process in Haifa started in October 2018, a few weeks before the municipal elections, where for the first time in the city’s history a woman was elected to be the mayor. In turn, Haifa’s new mayor, Dr. Einat Kalish Rotem (a city planner by profession), made history again by appointing an Arab woman as her deputy – Ms. Shahira Shalabi, who is currently a city council member.

The City for All process, with the full support of the new mayor, is led by her Advisor on Gender Equality- Ms. Beatrice Katz Rozen and an incredibly diverse multi-sectoral steering committee (including Jewish and Arab women, Religious women, and activist women, divided into 5 sub-committees who drafted The Gender Equality Action Plan for the City of Haifa.)

For the first time in municipal history there is a Gender Equality Committee established and operating in the city.

It is led by council member Naama Lazimi. The committee’s mandate is to advance the City for All process and implement its Action Plan in the future.

Haifa City for All – Vision and Action Plan

Matte Asher is a regional authority in the Western Galilee, covering the area north of Haifa up to the Lebanon border. It includes 32 rural villages, moshavim and kibbutzim, including two Bedouin villages. This is Itach Maaki’s first program with a regional authority, rather than an urban municipality.

City for All in Matte Asher focuses on the central theme of combating gender based violence. The program will be a two-year program, and will be funded half by the municipality and half by Itach-Ma’aki donors. This is the first time that the municipality will be paying a full 50% of the costs, furthering the scalability of the City for All program.

Efforts to combat gender based violence in Matte Asher will focus on three strategies:

For each of these strategies we will be holding public consultations, seeking out representatives from diverse minority populations to participate in the consultations and establishing a local lead team.

A memorandum of understanding between Itach Maaki and the municipality has already been established, and planning has begun together with the Matte Asher Mayoral Advisor for Gender Equality, Yael Shavit and other municipal workers and committees.

The Head of the Authority (equivalent to the mayor), Moshe Davidovitch, has already committed to being a part of the lead team for the City for All program. We also have two additional partners who will play specific roles in the Matte Asher program: the Public Knowledge Workshop (HaSadna) will conduct work on data collection and analysis to get a proper mapping of the area, and the Institute for Democracy Education will be participating in the education part of the program.

Beit HaKerem is a cluster of seven authorities in the Galilee of northern Israel, with a total population of approximately 140,000 residents. The cluster is very diverse, encompassing Christian, Jewish, Muslim, and Druze populations and consisting of villages, moshavim, and cities.

In the next phase of the process, Ehskol will decide on 4 or 5 major topics in the field of STEM to concentrate on, and establish a committee to work on each of them. One of the topics will most likely be Gender, Diversity and Inclusion, and will be led by Attorney Dana Myrtenbaum. The committee will do a wider community stakeholder consultation on the topic in order to develop an action plan. The process is being led by the Eshkol together with the Ministry of Interior, and is likely to be replicated for other clusters and municipalities.

City for All Program Director Attorney Dana Myrtenbaum participated in and facilitated 3 public consultation meetings each attended by between 70 -100 representatives from the fields of education, business, academia and civil society. During these consultations, data from the initial mapping work on employment, education and demography was shared. The gender gap between men and women in STEM, along with other issues such as digital literacy, language, and teacher training were all discussed in the most recent plenary.

Akko is a unique city in the Israeli landscape, home to an incredibly diverse population of different ethnic, religious, cultural, and age groups. Akko is 60.4% Jewish and 31.8% Arab, with about 20% of residents over the age of 60.

The Jewish population is largely secular, but the religious population is growing and includes Haredim, Chardalim, and Dati Leumi’im.

During the first phase of the City for All process in Akko (2017-2018), our multi-sectoral steering committee accomplished the following:

The second phase of City for All in Akko was the implementation of the Action Plan:

Located in the center of Israel, the Arab city of Tayibe is recovering from a financial and organizational crisis that took place in the past few years. While its residents face many economic and social challenges, women and girls face the additional challenges of  gender discrimination, gender gaps, safety, employment stability, transportation, and more.

The City for All Process in Taybeh (2017-2018) was led by Dr. Nehaya Habib, who was the first woman elected to the Taybeh City Council. City for All in Taybeh worked with a group of women leaders from the city and with the full support of the Mayor, Adv. Shoua Masarwa.

The City for All program was initiated in Rishon Lezion in 2017, inspired by the work of the Rishon Lezion Women’s Network. The city, with the 4 th largest municipal population in Israel, is now a leader in building resources towards gender equality, including:

These four fields of action were  also the foundations of the public consultation process (Roundtables) in Akko and Taybeh and led to their Gender Equality Action Plans. 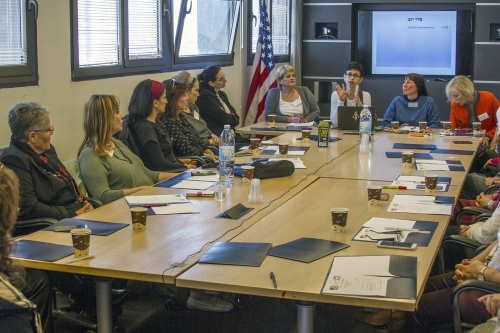